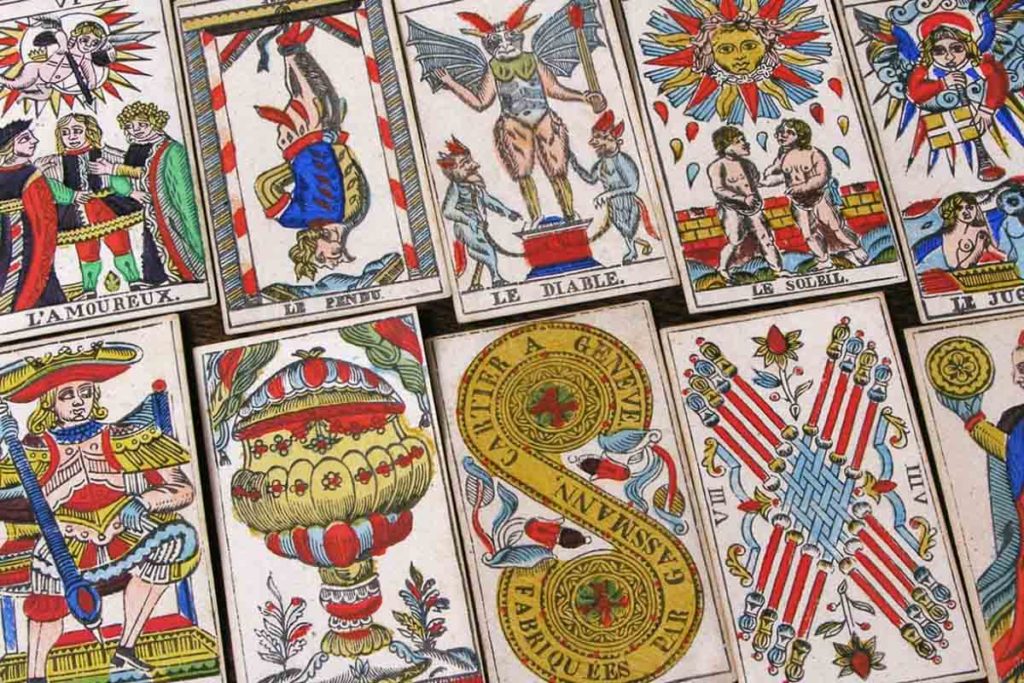 We’ve all heard the expression, “Everything old is new again!” It certainly has been true in the world of fashion, art, music, architectural design, and more.

The same can be said about the history of tarot. Tarot did not begin as a tool for divination. In fact, tarot has been credited with inspiring the modern equivalent of the card game we know as Bridge. The game, which was played in Italy in the mid-fifteenth century, was called Tarocchi. There were four suits and a longer suit of tarots. They were always trumps. If a player could not follow the suit in play, he had to play a trump to take the trick.

Its early origins can also be traced back to a kind of parlor game played by the Italian aristocracy in the sixteenth century. The players picked a card, and inspired by its image, wrote poetic verses about one another. This kind of story-telling is seen today when the life events of a querent are prompted by cards that come up in a reading.

Later, in the late eighteenth century, tarot evolved into a means of predicting the future and telling fortunes. Credited with that incarnation are Antoine Court de Gébelin, Le Comte de Mellet, and Jean-Baptiste Alliette (Etteilla.)

As time went on, tarot took on other associations: astrological and numerological attributions, Kabbalah, The Golden Dawn, with its esoteric functions of the Majors and its Lords in the Minors. More recently tarot has been used as a device by some therapists to tap into the psychological world of their clients.

History aside, I had my first exposure to tarot when I went for a reading with Barbara Blanchard in Sheepshead Bay, New York in the mid 1970s. I knew nothing about tarot then except from what I’d heard from friends, but it sounded fascinating. As she laid the cards out into what I later learned was a Celtic Cross, I was a little nervous, but mostly astounded by what she was able to tell me about my life and my future by looking at the pictures on those cards. I was hooked! I wanted to know more. I wanted to be able to read the tarot as well.

However, it wasn’t until after I had retired from thirty-eight years of teaching theater and directing plays that I was able to pursue that ambition by formally studying this ancient tradition. Since I was a child, I have had intuitive, some would say psychic, revelations. I thought tarot would serve as a powerful medium for those flashes of insight. The contrary proved to be the case. When I turned over a card, my left brain was so inundated with “What’s the astrological attribution?;” “How is the number 4 significant?;” “Where does the card fall on the Tree of Life?;” “What’s the Golden Dawn title of that card?” that my intuitive right brain was spinning out of control with more unanswered questions than it was accessing the clarity I had hoped for.

Perhaps it was that I knew too little about a lot; if I had truly mastered any of those systems and allowed them to run on automatic in the background, they may have been more useful to me. I definitely see value in all of them and often apply what I know of Kabbalah and The Golden Dawn when I read. When a five comes up in a reading, I know that it falls in Gevurah on The Tree of Life, and, one way or another, there’s going to be a real challenge ahead. Or if the Six of Wands shows up in a reading and I recall that the Golden Dawn title is “The Lord of Victory,” I can confidently predict a favorable outcome.

Enter my friend, Sasha Graham, who says, “Why don’t you write a book about tarot?” I told her I had nothing to say that hadn’t already been said and, from my perspective, far more effectively. I’ve never considered myself a tarot scholar; rather, I think of myself as the perpetual student who is always in pursuit of a deeper understanding of the mysteries of these seventy-eight, sometimes elusive cards. I didn’t want to write another version of the history of tarot, along with its associated systems, spreads, and meanings. But Sasha had another idea. She said, “You know you love tarot; find something else you love, put those two things together and there’s your book.” That was it! Tarot and theater. Now, I thought I had something to say after all. Something, that as far as I knew, hadn’t been written before, at least not in the way of a book devoted to illustrating how tarot could be understood in the way an actor creates a character in a play and the way he hones his craft.

So, to my earlier point, tarot began as a game of storytelling. That notion prompted me to think of what tarot and theater have in common: They both tell stories; they have characters and conflict. There are themes in both of love, passion, ambition, mental challenges, and extraordinary circumstances that interrupt what would otherwise have been an ordinary life. Both tarot and theater have settings, costumes, props, and lighting, like the radiant glow in the Sun Card, the Fool, and the Magician, or the dark shadows in the Devil card, the Moon, and the Five of Pentacles, for example.

As I began to focus on how the tarot cards could be illuminated through the lens of theater, I concentrated on the characters in the cards: what are their hopes, their dreams, their struggles, their triumphs?—what brought them to the point in their lives where we first see them depicted in the cards. In other words, what were their backstories and projecting them beyond the card’s “snapshot,” where do they go from there?

This point of view guided me through the writing of Bringing the Tarot to Life. The journal writing and theater games in the book are designed to explore the inner lives of the cards, to get into their skin, and to creatively delve into their psychology. This playful approach to interacting with the cards is meant to provide new ways of understanding the tarot and making the cards your own.

For example, I was looking at the RWS Nine of Cups. I noticed that the figure was sitting with his legs spread and his arms folded across his chest, closing off his heart chakra. That observation lead me to think that under some circumstances, this card could be speaking of casual sex. That’s a meaning I had not read before, but it certainly made sense to me. Again, with my right brain leading the way, I took a look at the RWS Ten of Wands. The Golden Dawn calls this card, “The Lord of Oppression.” Indeed, slumped over by the heavy weight of those staffs he’s clutching to his chest, he does look oppressed. Perhaps he thinks if he doesn’t do it all, it won’t be done “right.” Yes, and he also wants the world to know how hard he works. But, since he has determined to take on the weight of the world, wouldn’t it have been easier to at least carry the staffs on his back? In other words, he leads with his burdens so they won’t go unnoticed. Without abandoning all your left brain knows about the cards, invite your right brain to begin exploring those parts of the cards that speak uniquely to you. And who is to say that what you think that card means is not expressly what it is saying at that time in that reading. Stand up inside the cards and own them. That is how you make them yours and how you liberate yourself from relying solely on how others before you have interpreted the cards. In Bringing the Tarot to Life, you are bringing your life to the tarot!